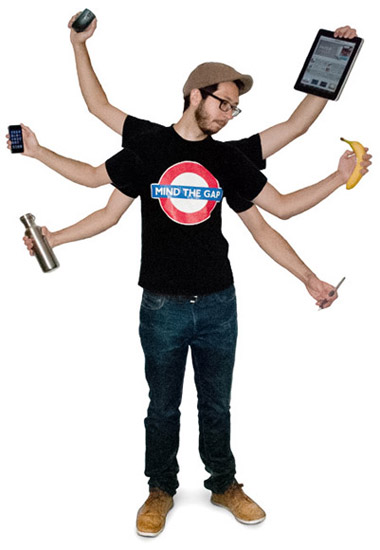 Radii is a web design and development production company which, for those of us in the industry, is code for "a company full of interesting people." And our interesting people are simply too much fun to keep locked away for ourselves. So here we share with you an interview with one of our interactive developers, Mark Appleby.

Why did you want to be a designer?
Fortunately, it was back in high school when I realized how important good design is, especially when it comes to digital content. It's hard to describe but it just plain felt "right" using well-designed software or navigating a well-thought-out website. I wanted to be part of that in some capacity.

Were there any other subjects or career paths you considered?
It was a real toss-up for me between pursuing computer science and graphic design. Ultimately I chose graphic design, mainly because I sucked at math.

What got you into development?
It was never enough for me to simply design cool things, I needed to be able to make them function as well.

How did you come to work at Radii?
I did a co-op interview here during my final semester of college, the rest is history.

What do you like best about your job?
I love the fact that I have the opportunity to constantly try new things. Whether it's Haml, Sass, Bootstrap, or media queries there is always something new and awesome on the horizon for me to experiment with.

What's your routine when you first get to work?
I have a folder of bookmarks in Chrome that I open up as soon as I get to work. This is sort of like a daily inspiration type thing. These sites include TheFWA, Dribbble, and Behance among others. I also scan the latest tweets in my stream and check email.

What's one problem you are best at solving for your clients?
I'm a jack of all trades. Perhaps its not really answering the question, but I would say the thing I'm best at solving is that weird random problem that comes up that nobody else seems to know how to solve.

Any accomplishments you're proud of?
Wrapping my head around iOS development. Having never coded in a language where I actually had to manage memory (aside from a brief stint of assembly in high school), learning Objective-C on my own was a daunting task but one that I was eventually able to overcome.

What advice would you give to someone interested in becoming a graphic designer?
This relates both to design and development: be capable of teaching yourself. Sure its great if you can find someone willing to teach you new things or you can afford to take additional courses, but being able to teach yourself using free resources online is truly powerful stuff.

What's the one item or app that you couldn't go a day without?
My iPhone. Sadly it's still the 3GS, I'm holding out for the iPhone 5.

What's one thing you've always wanted to do?
Murder IE6 in the flesh. That browser has caused me so much angst in the past. Sadly it is only digital.

What's your favourite way to spend a weekend?
I love experimenting with new languages and frameworks in my spare time.

Chrome, Firefox, IE or Opera?
Chrome. Why is IE even on this list?!

Most useful design or dev tool/app?
CodeKit, if you're not using it, you're doing it wrong. Also, Vim is an absolutely phenomenal text editor. It took me a while to get the hang of it, but now I simply couldn't imagine writing code in anything else.

Favourite movie?
It's a toss up for me between Lost in Translation and There Will Be Blood.

What's your hobbies?
I just bought a Canon T3i and a few lenses so that has been consuming my time lately. Long story short, my cat is sick of being filmed.

Speaking of pets, any pet peeves?
People that block subway doors when people are trying to get off. Also, people that stand on the wrong side of the escalator; left is for walkers and right is for standers, come on people.

Favourite font?
Call me boring, but I love Helvetica.

That's it for this edition of Eye on Radii! Coming up will be an interview with graphic designer David To. Meanwhile, take a look at Our Work and see which projects our Interactivity Ninja has worked on.