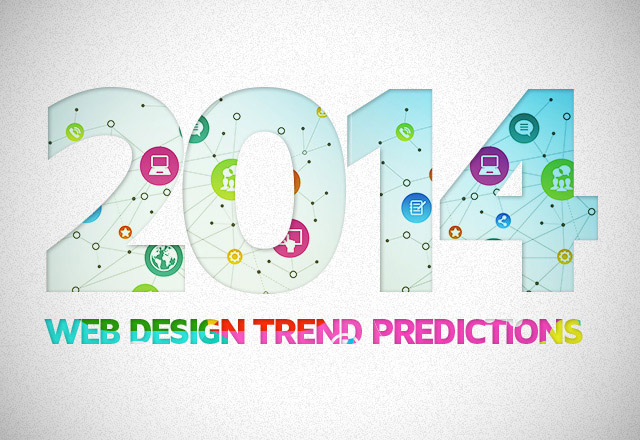 Each year, we like to take a look at how the web (and specifically web design) is evolving and cast our predictions at what the new year holds. Our 2012 predictions hit fairly close. While some of our 2013 predictions certainly came true, it looks like some of them (such as flat design) are still taking place as an ongoing trend as we enter 2014.

So here's our list for 2014: the four most important trends we expect to see more as the year goes on. Enjoy!

While 2013 saw a huge shift in the use of photography and full-screen imagery, we expect to see more importance on typography in terms of actual design. This means more experimental typography, but also the use of typography in minimalism. Especially as the popularity of open-source fonts like Google Webfonts increases, the use of your standard Arial and Helvetica might become less common. Similarly, we can expect to see more CSS3 backing up typography (especially of the experimental sort) to continue to push the boundaries of the status quo.

As more and more websites become responsive, we'll see a renewed focus on the overall user experience. Instead of 2012's parallax scrolling, we can expect to see trends such as scroll-activated animations and the increased incorporated of GIFs and other automatically-triggered multimedia to encourage users towards call-to-actions. While we don't expect this to go to the neon-and-beveled levels of early 2000's web design (we certainly hope not), this increased focus on how the user actually interacts with the site will bring new and interesting ways to create positive experiences and generate returning behaviour.

It started in 2013 and it doesn't look like it's slowing down any time soon. The grid-based layout of Pinterest will continue to be adopted and incorporated into many landing pages (generally news-style feeds). This has a huge effect on the type of imagery and copy that will be the most effective, largely because both will need to be easily scannable and easily scalable. Nevertheless, this generally shows a compatibility with responsive design (as opposed to the single-feed, streamlined news layouts of years past).

The web's first incarnation relied heavily on brochure-style websites: stagnate, one-stop-shops for basic contact information and a only a vague idea of anything else. Fortunately, the web as a whole is growing past accepting the single-visit behaviour that those brochure sites generated. Instead, more and more companies and webmasters are using the web as a "pull" medium to attract visitors to their site and convert them into a returning community. Incorporating more storytelling features, just as long-form introductions, recognizes this. We hope this will help diminish the proliferation of zombie copy, and instead create room for more genuine, human-to-human marketing and education.

Have another bit of WordPress knowledge you think every developer should know? Let us know in the comments!